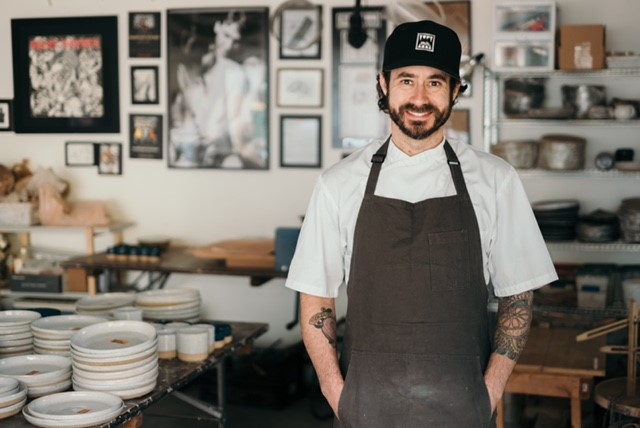 With an upbringing that placed a heavy emphasis on food – from family vacations, to summer camps, to mornings at the DMV, Zachary Meloy always made a mental note of what he’d eaten each day as a child. While attending college in Birmingham, Zach worked with award-winning chef Frank Stitt at Bottega, and ultimately landed on a culinary career after graduating with degrees in both Spanish and ceramics. Leaving Birmingham, Zach enrolled in Johnson & Wales in Denver and, after graduating, spent close to five years living, traveling, eating, and studying in Central America. Seeing the shared ingredients he’d once thought specific to his home in the South, he became fascinated with the natural overlaps between the Latin and Southern American kitchens.

After working alongside chefs Kevin Taylor and Sean Yontz in Denver, and Gerry Klaskala and Jay Swift in Atlanta, Zach successfully established his own style of cooking that can be traced back to his roots in Southern and Latin cuisine, while elevating them with creative flavor combinations and expressive presentations. In 2011, he started PushStart Kitchen, an underground supper club, in a rented art studio at the Goat Farm in Atlanta. In the space, tucked away in a 130 year old factory, they served private, prix fixe meals to members of their modern speakeasy focusing on his favorite elements of Latin-Southern cuisine. During their almost three years in business, PushStart Kitchen garnered local, regional and national recognition, a membership list of over 5,200 members and had been featured on several television programs including TBS’ program Trends With Benefits and Food Network’s Chopped.

After feeding 100+ guests per week through the supper club, and running a brick and mortar space, Better Half, for over 3 years, Zach Meloy has returned to ceramics and refocused his sights on creating unique and intimate dining experiences at a smaller scale.

Dirt Church was born out of Zach’s creativity and passion for food, event-making and ceramics. Now Zach brings this experience to you - in the comfort of your own home.