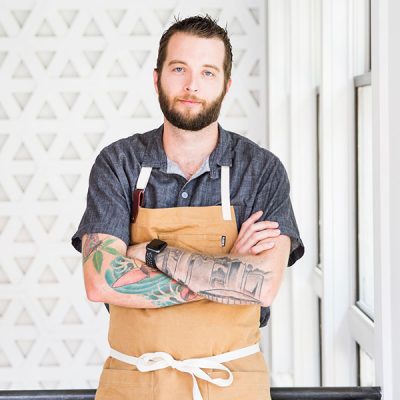 Known in Houston’s culinary community as the “Whole Hog Guy”, Patrick Feges is a self-taught pitmaster and Purple Heart recipient from injuries sustained during a tour in Iraq. It was during his recovery that he was hit with the barbecue bug. Armed with an old, worn-out Brinkmann smoker and plenty of tenacity, Patrick experimented through trial and error before deciding to attend culinary school at The Texas Culinary Academy, the Cordon Blue, in Austin. There, surrounded by some of the best barbecue spots in Texas and learning classical basics in class, he began honing his approach to barbecue.

In 2012, Patrick purchased a large smoking rig and launched Feges BBQ, catering events and executing pop-ups with non-traditional smoked cuts. In the ensuing years, he continued to train in some of the city’s most acclaimed kitchens including Underbelly, Brennan’s of Houston, Killen’s Barbecue and, most recently, Southern Goods, while building his business on the side. He opened Feges BBQ with his wife Erin Smith in March 2018.