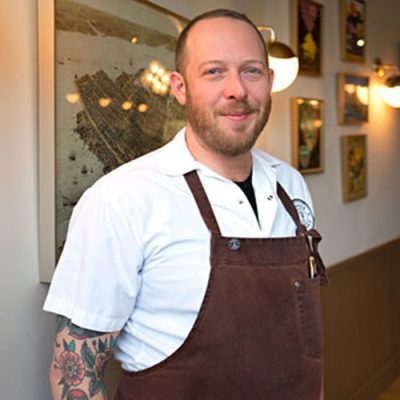 Mark Steuer's love of food, cooking and hospitality is rooted in his experiences of helping his mother and grandmother in the kitchen as large gatherings were an important part of his family’s traditions. Having grown up as the son of German immigrants, Bavarian culture and cuisine is fundamental to his culinary narrative. Steuer’s primary language was German, and it was spoken exclusively in his Charleston, South Carolina home until the age of three. His South Carolina upbringing introduced him to Lowcountry cooking and the distinctive assortment of ingredients of the American South. The influences of German immigrant culture and its ties to Southern BBQ laid the basis to his current expression in cuisine.

Equally noteworthy in Steuer's basis as a chef was his first experience working in the restaurant industry at Brett’s, a James Island restaurant owned by esteemed Charleston restaurateur Brett McKee. From there, he continued his formal culinary education at the University of Wisconsin in Madison. He put his knife to the cutting board at Le Chardonnay where he worked his way up to Sous Chef before heading to Chicago to work with James Beard Award- winning Chef Mindy Segal at HotChocolate.

He worked with Segal to develop his palate and his expertise in sourcing ingredients as he rose through the ranks from line cook to Executive Chef. He earned HotChocolate three stars from the Chicago Tribune as well as numerous accolades from the city’s culinary community. Once moving on from this position, he worked as a consultant for Rootstock, Executive Sous Chef at The Gage and opened The Bedford, a bar and restaurant rated three out of four stars by the Chicago Tribune.

Steuer went on to conceptualize and create Carriage House where he was a partner and served as Executive Chef. Carriage House received many awards—both locally and nationally— most notably named one of the 10 Best New Restaurants in America for the year 2014.

Steuer has spent the last year in a collaborative role as both Partner and Chef de Cuisine for El Che Bar. He was instrumental in its opening, and he continues to assist in its ongoing success.