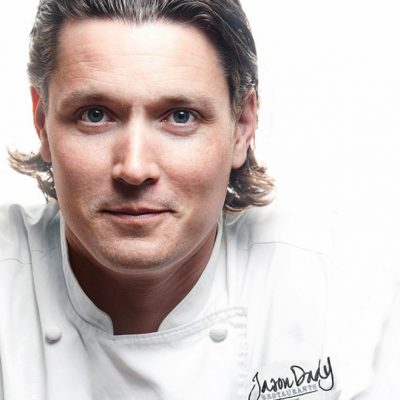 Since 2001, Chef Jason Dady has explored the culinary scene of San Antonio, Texas. Dady goes beyond the role of restaurant owner, applying familial values to create tight-knit bonds with members of his team and residents of the San Antonio community. The familyowned Jason Dady Restaurant Group is helmed by Dady, alongside brother, Jake (Co-Owner/COO), and wife, Crystal (Co-Owner/CFO).

At the forefront of the San Antonio Culinary Scene, Chef Dady has starred in Iron Chef Gauntlet (2017) and Beat Bobby Flay (2017). Other appearances include Travel Channel’s “Delicious Destinations by Andrew Zimmern” (2016), and Food Network’s “Man, Fire, Food” (2016), among others. He honors include James Beard Foundation Award Semifinalist (2012) and Guest Chef in NYC (2005, 2008). His work has been lauded through local accolades, such as: “Best Chef in San Antonio” by the San Antonio Current and San Antonio Magazine (2013, 2018), “40 Under 40 Rising Star” in the San Antonio Business Journal (2008), and “Rising Star” in Restaurant Hospitality Magazine (2004), among others.

Dady resides in San Antonio with his wife and their three children. He and his family enjoy outdoor activities, such as camping, fishing and horseback riding in their free time.