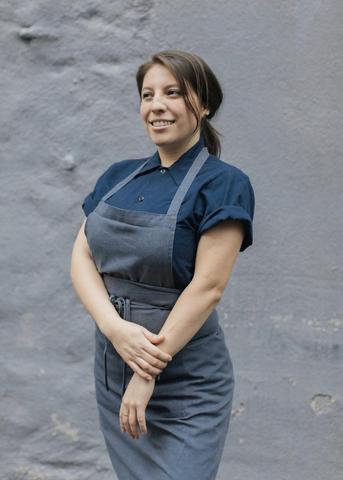 Currently the pastry chef of Lutèce in Washington D.C., Isabel Coss is a pastry chef who tells stories through her technique-driven desserts, celebrating and finding inspiration in local ingredients as well as the flavors she grew up with in Mexico. Coss first fell in love with cooking alongside her grandmother and fondly recalls early memories of the colorful candy street stands in Mexico City. She took on her first kitchen job at the age of 17 as a bread baker in Enrique Olvera’s landmark restaurant Pujol. In 2011, Coss moved to New York City to work with Alex Stupak at Empellón. She moved on in 2016 to help open Claus Meyer and Gunnar Gilson's Grand Central Terminal restaurant, Agern, before rejoining Olvera and Daniela Soto-Innes at Cosme. In her role as the executive pastry chef for Casamata Restaurant Group, which also included ATLA in New York City and Elio at the Wynn in Las Vegas, Coss refined her approach to food, focusing on ingredients in their natural state to better reflect the world around her. She was awarded StarChefs rising pastry chef in 2019. Coss believes food is the most humble and vulnerable way to give and find joy, and to connect as humans.