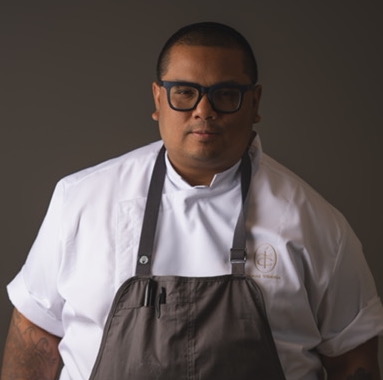 Born in the Philippines, Harold Villarosa received his earliest culinary and agricultural education in the bukid rice paddies of Iloilo City. At age 9 he immigrated to the South Bronx, New York City and at 16 got his first job working at the McDonald’s on 34th street. What started out as a way to make cash to buy Jordans sneakers turned into a passion and eventually a career that has taken Harold all around the world, impacting the lives of many of those along the way.

A major turning point in Harold’s career came when Rene Redzepi extended a personal invitation for him to come work at the #1 rated restaurant in the world, NOMA in Copenhagen. Later staging at Michelin rated restaurants like Aquavit, Aureole, and Rouge Tomate, Harold’s young career blossomed. This led to more opportunities to earn roles at establishments such as Fedora, Batard, and 3 Michelin-starred Per Se. His first Executive Chef role was at the original hidden gem at the end of Freeman’s alley, Freeman’s Restaurant.

Chef Harold has been featured in numerous media outlets over the years including VICE’s ‘Munchies’, NY1 where he was named ‘New Yorker of the Week’, and is now one of the featured hosts on Bon Appétit with his new show ‘Dish It Out’. Villarosa also runs a non-profit organization called Insurgo Project, where he teaches youth in low-income neighborhoods about food justice and gives them first-hand experience on what it takes to make it in the restaurant industry.