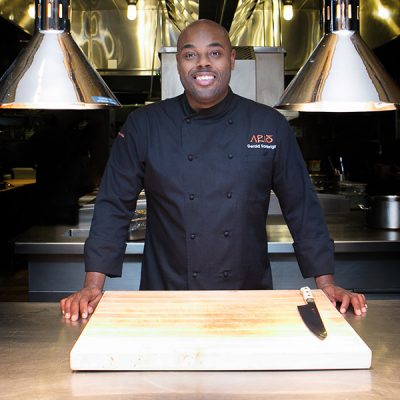 Knife and Spoon the the RItz Carlton

Gerald began his professional career as a dishwasher, yet what intrigued him most in the restaurant, was a picture of a man framed on the kitchen wall. The Executive Chef there refused to tell him who was in the photo and tasked  Gerald with finding out on his own. This quest sparked his curiosity-the man in the photo was Auguste Escoffier. Chef Sombright has held a series of impressive culinary positions across the country including working  most recently as Chef at  the Four Seasons Resort Orlando at Disney World, as well as at Wit & Wisdom-A Tavern by Michael Mina in Baltimore, Maryland, and at the Four Seasons and the Westin in St. Louis. He was a contestant of season 14 Bravo’s Top chef.