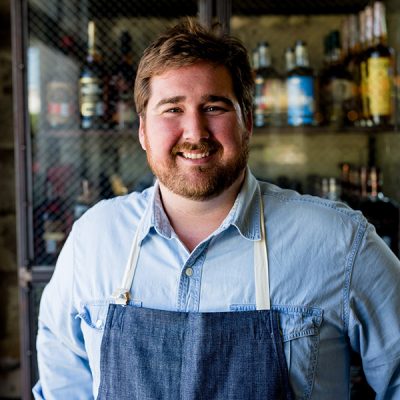 Drake Leonards is the Executive Chef-Partner of Eunice in Houston, Texas. Drake grew up on a rice farm in Eunice, Louisiana, and began his restaurant career there at the age of 15 as a dishwasher in a local eatery. Following his passion, Drake earned a Bachelor of Science degree with a focus in culinary arts from Nicholls State University. During his time there, Drake completed an externship at BRG Hospitality’s flagship New Orleans restaurant, Restaurant August, and assisted on the opening team for the group’s third restaurant, Luke.

Upon graduation in 2008, Drake moved to New York City to work at Café Boulud under the tutelage of acclaimed chefs Daniel Boulud and Gavin Kaysen. There, Drake quickly drew parallels between French country cooking and his Southern Louisiana heritage while continuing to develop as a chef over the next two years in the award-winning kitchen.

Next, he spent two years living and working in the Black Forest of Germany and traveling through Spain, France, Switzerland, and England, collecting gastronomic experiences along the way. In April 2012, he returned to New Orleans to hone his Provençal culinary skills at BRG’s La Provence before spending time as a Sous Chef at August. He then returned to Luke as Sous Chef before moving up to Executive Chef in 2014. After three years at Luke, Drake was presented the opportunity to expand into the Houston food scene with his own concept, Eunice, a modern Creole-style brasserie named for his beloved hometown.