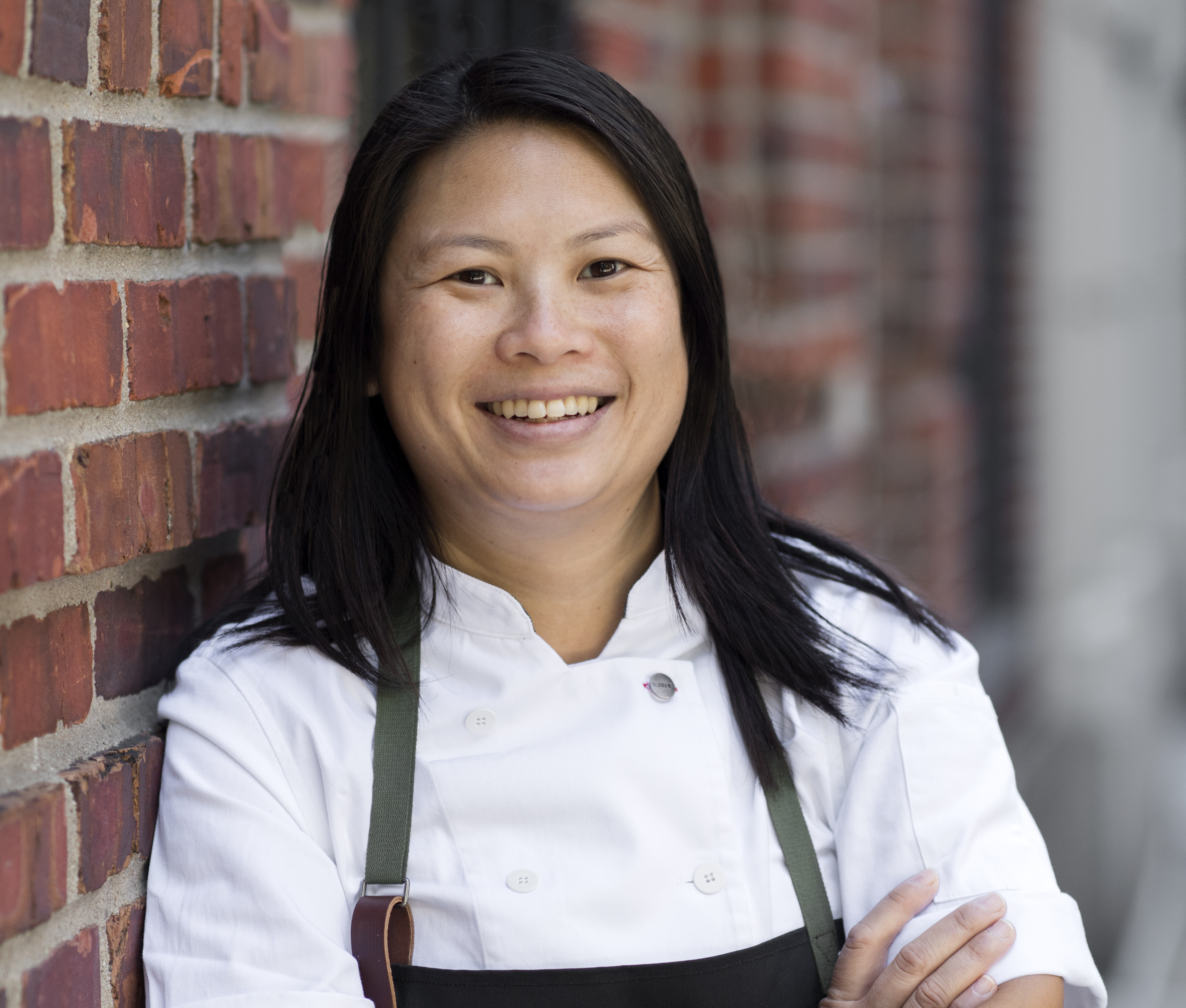 Raised in Oakland, California by parents who emigrated from Hong Kong, Christine first started cooking alongside her brother as a hobby to feed themselves when their parents worked long hours.  A love of restaurants was instilled by her mother who despite not sending her to Chinese school on the weekends, made sure she could always order proficiently off the menu.

Christine got her start working in restaurants at the age of 17 as part of a senior project requiring students to undertake 100 hours of wage-free work.  She opened up a Zagat Guide and made her way through the top restaurants of San Francisco, landing at One Market Restaurant.  When she showed up on her first day expecting to do office work and wash dishes, the chef de cuisine, expecting an extern, asked where her knives and chefs pants were.  Christine was immediately put on a station, learning how to shuck oysters and brunoise shallots for mignonette.  Thanks to an innate ability to read tickets and plate food she moved up quickly and was hired on at the end of her project.  When that summer

came to an end, Christine started her freshman year at UC Davis, playing soccer, but working in restaurants remained the focus of her energy.

Eventually Christine transferred to New York University and studied Media, Culture and Communications. She spent a year studying abroad in Hong Kong, which felt like a homecoming for her.  Upon returning to New York, she surrounded herself with restaurant people and ate her way around the city, while feeling torn between post-graduate corporate jobs and her interest in working in restaurants.

When she made the decision to sink herself fully into the restaurant world, Christine went to work at modern Italian fine-dining destination Alto, where she worked the pasta station on a menu steeped in the luxury hallmarks of the era, truffles, foie gras and caviar.  When she left for a sous chef position at Centovini under Patti Jackson, in addition to a new found dedication to handmade pasta, she learned a new vocabulary of Italian food that would change her approach to cooking.  Thanks to a menu that relied heavily on greenmarket produce, Christine built relationships with farmers and learned a new appreciation for seasonality, simplicity and learning how to let local ingredients speak for themselves.  While cooking in New York, every ten days of vacation she could accumulate, Christine traveled to Asia. On trips to Thailand, Vietnam, Hong Kong, Taiwan, Japan and Korea, she immersed herself in the foods and cultures.  Creating taste memories that would form a foundation in the next phase of her career.

After cooking Italian food for several years, she jumped at the opportunity to open Bar Basque.  Over the years working both there and at Sea Grill with Japanese-American Chef Yuhi Fujinaga, Christine learned a natural language of marrying Japanese ingredients and techniques with continental cuisine.  Whether it was looking to Japanese butchering techniques on a Spanish mackerel dish, or using mushrooms, white soy sauce and dashi to build flavor.  Christine furthered her Japanese culinary education when she opened Bar Chuko Izakaya with a trio of Morimoto alums.  Based on the casual, Japanese, late-night gastropub concept, Christine’s menu was made up of fun shareable plates and a full yakitori menu-- the kind of food best enjoyed with a few drinks after work amongst friends.  In the years following Bar Chuko, Christine criss-crossed the country as a Director of Food and Beverage for Graduate Hotels. Conceptualized nationwide menus and opening a brand-wide coffee concept before returning to New York.

Christine opened critically acclaimed Kimika in the middle of a pandemic, with an all female-led kitchen. Her menu featured Itameshi -- a take on Italian-Japanese cuisine with a focus on seasonality and local produce to critical acclaim since August of 2020.  In 2021, Kimika was named to Condé Nast Traveler’s The Best New Restaurants in the World.