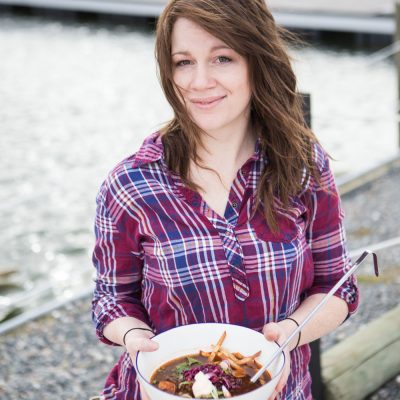 Born and raised in the Blue Ridge Mountains, Chef Autumn Cline’s appreciation of cooking, gardening, and communion around the dinner table started in her grandmother’s rural Virginia kitchen.  This early interest in growing, preserving, preparing, and sharing food is the foundation of her approach as a chef.

Chef Cline broke into the DC restaurant scene when she joined the culinary brigade of Chef Jeffrey Buben in early 2010. After cutting her teeth at his DC institution, Vidalia, she jumped on board with Michael Mina's concept restaurant, Bourbon Steak, at the Four Seasons Hotel in Georgetown. There she spent most of her time in the butcher’s shop, learning whole-animal butchery as well as old-world charcuterie technique.  Like her grandmother's kitchen, the union of tradition and whole ingredients would continue to form the backbone of Cline's approach to cooking.

From Bourbon Steak she signed on with Aaron Silverman and crew to help open Rose’s Luxury, which earned the title of “Best New Restaurant in America” from Bon Appetite Magazine.

When the time came to create food in her own space, Rappahannock Oyster Company was quick to heed the call.  As executive chef at Rappahannock’s Union Market and Southwest Waterfront locations, she enjoyed the freedom to call upon her history and investigate new techniques and ingredients. Her focus on playful yet refined cuisine melds perfectly with her dedication to responsible sourcing.