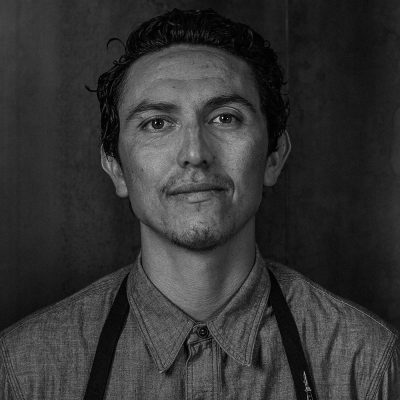 Growing up in El Paso, Alan Delgado’s mother would wake him up with traditional tortitas de papa. But when she became ill, he stepped into the kitchen and taught himself how to prepare healthy, vegetable-centric dishes.

After briefly studying civil engineering at the University of Texas at El Paso in 2009, Delgado moved to Austin to attend the Texas Culinary Academy. He began cooking wherever he could: Sway, Olivia, Apis, and Carpenter’s Hall before becoming sous chef at Launderette in 2016. Delgado moved on to Patika, where he founded the pop-up, collaborative chef series Tumahye Supper Club.

In 2017, Delgado took over the kitchen at Counter.3.Five.VII as executive chef before joining Chef Gabe Erales and Rising Stars alum Philip Speer at Mexican hot spot Comedor as sous. In 2020, Delgado left the Lone Star State for a new opportunity: director of recipe and development of Brooklyn’s Michelin-starred Oxomoco. Delgado worked alongside Rising Stars alum Justin Bazdarich to create the wood-fired, Mexican-inspired menu for the original Greenpoint location, along with its Tokyo offshoot. Delgado was then tasked to design the menu for Oxomoco’s upcoming, plant-forward Mexican spot, Xilonen, a callback to his childhood, in Brooklyn in 2021. Delgado was the winner of StarChefs’ 10th Annual Vitamix Challenge, which presumably inspired his badass Vitamix tattoo.