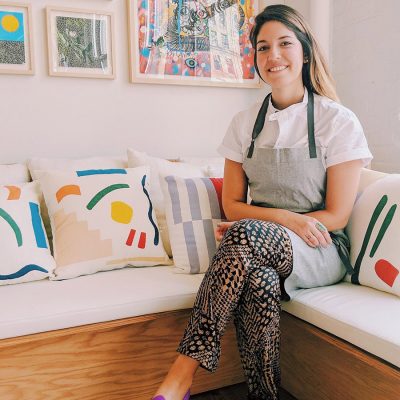 Adriana was born in Caracas, Venezuela into a family of architects and artists. Combining her natural eye for design and personal passion for all things food, she decided to pursue a culinary career. She refined her talents at top international culinary programs including L'Ecole de Cuisine Alain Ducasse in France and Sumito Estévez’s Instituto Culinario Caracas in Venezuela, before serving as an apprentice at Spain’s Michelin 3-star restaurant, Martín Berasategui. Adriana moved to NYC in 2011, where she's since launched her successful pop-up and private dining company, Tepuy Dining, as well as held the title of executive chef at the James Beard-award winning Nolita eatery, De Maria. Additionally, Adriana is a three-time winner of the Food Network’s Chopped; her most recent victory was on the highly competitive ""Chopped Grand Championship"" – she is the only Latin-American female chef to have won the title. With a unique culinary ethos centered around eclectic, vibrant dishes that are rooted in her Venezuelan heritage while concurrently pulling inspiration from her time spent in some of the world’s most innovative kitchens; Adriana is an exciting and fresh new culinary voice. Beyond her work in the kitchen, Urbina is also a passionate activist. Her ongoing mission is to use her unique culinary expertise as a voice to shine a light on meaningful causes that support immigration reform, women’s rights, and aid to those in need in her home country of Venezuela. Her most recent project was featured in Forbes and it’s called The Table. A platform that gives paid opportunities to women in the food industry to showcase their work to a wider audience.